The last scheduled meeting of the AMC’s 2019-2021 term was held March 20th. As usual, it was livestreamed and the recording posted online.

We also reviewed the results of the February membership and Local Group leader surveys. Points of interest include:

Finally, American Mensa’s election runs from April 15 through May 15th. Aside from a referendum proposal, we have many fine volunteers running for positions on the AMC. Please honor their willingness to serve by taking a moment to vote. Thanks!

As a Proctor, I often asked admission test candidates why they were interested in Mensa. Once a guy said he wanted to be a sperm donor. Did he think Mensa membership would help propagate his DNA throughout the universe? Did he just want to pull my leg? Regardless, his answer was enough to immediately stop me from asking more questions.

We all join for different reasons. For me, I was frustrated with my career and networked with a leader at our company. He mentioned another employee who was “so smart that he’s in Mensa.” That motivated me to look up some old test scores and join. While my career advanced significantly after that, I can’t say my membership helped or hurt. Unlike the 73% of us who don’t tell our coworkers about Mensa, I never hid my membership.

Whatever our reasons for joining, anyone who isn’t a life member must periodically decide whether to renew. Many stay because Mensa is where their friends are.

Some have met their spouses in Mensa. Personally, my wife was not a member. She was quick to point out when I did things that weren’t all that smart. Hoping to deflect some of that, I suggested she look up her old scores and sure enough, she qualified too. She’s now an active Mensa volunteer, and I still lose all the arguments.

The pandemic curtailed almost all in-person contact. Fortunately, many Local Groups quickly pivoted to provide fun virtual experiences. I’ve learned how to “speak Ozark” with St. Louis Area Mensa, crashed and burned during Chicago’s AGOG RG “Tipsy Trivia with Tim”, learned about sports broadcasting with Northeast Indiana Mensa, and heard about Alzheimer’s research with Central Indiana Mensa. Groups across the country have opened their virtual meetings to everyone, significantly expanding opportunities to get value from our memberships. You can learn more by reading other Local Group newsletters or checking the national events calendar.

Everyone is hoping we’ll be able to meet at the World Gathering in Houston August 24-29. Mind Games® was cancelled for this year but will be back next year April 28 - May 1. CultureQuest® was moved on-line; registration for this year’s event closes March 31st.

Even if all you do is read the Bulletin or participate on Facebook, I hope you can find plenty of reasons to renew your membership and will do so by the March 31st deadline.

[Note: after this article was written, Laura King withdrew from the race.]

I don’t know about you, but I really miss seeing my Mensa friends in person. 2020 was a year without an Annual Gathering or Mind Games®. RGs were cancelled. Local Group events couldn’t happen. While there’s hope for a return to some sort of “normal”, 2021 hasn’t started out much better.

Mensa members are creative. We’ve shown it by offering totally new alternatives. We’ve had mixology classes. In two different murder mysteries, I’ve played a sleazeball casting director and “Cal Von Cline”, a world-famous designer from the 80s. For the record, I wasn’t guilty either time. And yes, I was wearing a mullet wig, but let’s not talk about that. We’ve seen speakers from across the country. Some Local Groups have opened their events to all Mensa members (see https://www.us.mensa.org/attend/calendar/). 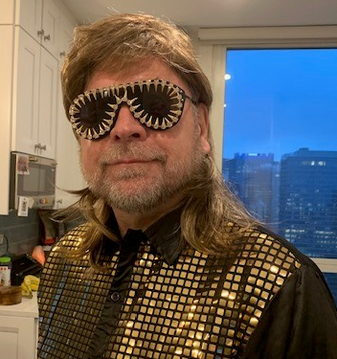 For a card-carrying extrovert, these events have been a reasonably good substitute. I used to drive hundreds of miles to attend many of them. Now I just walk into my office and fire up my laptop. While it’s still nice to see everyone and is certainly more convenient, it’s just not the same. I sure look forward to attending events in person again, and hope we continue making some events available virtually.

Nationally, the World Gathering (WG) 24-29 August in Houston TX is still scheduled as an in-person event. It will be preceded by the Mensa Foundation’s Colloquium on “Advances in Food Science”. Registration for both is open now; rates for the WG go up again April 30th. I hope we can see each other there.


Election Eligibility Reminder – And a “Meet the Candidates” Opportunity

American Mensa and Mensa International elections are coming in April. To vote, you must renew your membership by March 31st. In contrast to other years, this election has many more contested races and a bylaws referendum proposal, so your election participation will be even more important.For Regional Vice Chair 4, three candidates have qualified for the ballot: Jon Gruebele (Chicago), Laura King (Sangamon Valley), and Barbara Kryvko (St. Louis). We’re cordially inviting you to attend a “meet the candidates” Zoom meeting on Tuesday April 6th at 6:30 pm (Meeting ID: 971 1254 7917, Passcode: 216 773). We’d love to see you there!

Moving into February, I hope those New Year’s resolutions have been working well for you. Many years ago, I made a resolution to not make any more resolutions. So far, it’s been working out splendidly!

Continuing our recent practices, the December 12th AMC meeting was held via videoconference and livestreamed. Some members attended “watch parties”; others shared updates via social media. When the AMC again meets in person, I’m hoping we’ll continue streaming deliberations for those not in attendance – an important step towards better transparency.

A motion I made to cap overhead costs for our 2021-2022 fiscal year budget was unfortunately defeated. Over the last 10 years, membership has declined by 10%, yet overhead costs increased 19%. That caused a 32% jump in overhead costs per member.

While the motion was defeated, I’m hoping the discussion will nevertheless lead to increased scrutiny of our overhead expenses, along with a renewed focus on using volunteers rather than staff.

All other motions were approved, including:

In our upcoming election, members will vote about switching from two-year terms for AMC members to three. There are good points on both sides of the debate. After careful consideration, I submitted this statement to the election committee for potential inclusion with our ballot materials:

If this amendment passes, then – including International – we would have two elections every six years instead of four. This would be a significant cost reduction for American Mensa.

While the proposed referendum’s text is silent about RVC elections, existing bylaws Article V(2) says: “The Regional Vice-Chairmen shall be elected in a manner and for periods of time similar to the national elective officers.” This ensures that if the referendum passes, the entire AMC including RVCs would be elected on the same three-year schedule.


I therefore recommend a vote FOR this amendment.

Obviously 2020 wasn’t the best year for many of us. American Mensa had to cancel our Annual Gathering (AG) and in-person Regional Gatherings (RGs). Fortunately, many groups stepped up with Zoom events and online RGs. The CultureQuest® trivia contest went virtual. Several online Leadership Development Workshops were offered, and recordings are available on the national website. Interestingly, all these virtual offerings have allowed some members to participate who have never before attended events. Hopefully we’ll continue to have online offerings once things return to some semblance of “normal”.

The 2021 World Gathering (WG), August 24-29 in Houston, is open for registration. It will celebrate Mensa’s 75th Anniversary. Our Gala Dinner speaker will be LeVar Burton and is expected to sell out. The WG will be preceded by the Mensa Foundation’s Colloquium on Food Science. We’d love to see you there.

Election Season is Upon Us

American Mensa holds elections for our entire Board of Directors (AMC) every two years. Members vote for five nationally elected officers (Chair, 1st Vice Chair, 2nd Vice Chair, Treasurer, and Secretary) plus the Vice Chair for your Region. We also vote on any qualified referenda.

Those running for office would appreciate you electronically signing their petition so they can qualify for the ballot. National officer candidates need 250 signatures; Regional Vice Chair candidates need 100. That’s not as easy as it might sound, particularly when COVID restrictions limit the ability to collect signatures in person. If candidates don’t have enough signatures by January 31st, they won’t appear on the ballot. Links to sign petitions can be found here: https://www.us.mensa.org/lead/amc/elections/candidate-petitions/

The window for submitting referenda closed on November 15th. We will only have one question to consider: whether to change our elections from every two years to every three years. If passed, we would then match Mensa International’s election schedule. Including International, we’d have two elections every six years rather than four under the current bylaws.

Members have until January 8th to submit pro/con statements to be published with the election materials. My February 2020 newsletter article detailed some of the arguments I’d heard. If you feel strongly one way or another, you can submit your thoughts via e-mail to elections@americanmensa.org.  The election will be held between April 15 and May 15th, with results available shortly thereafter. To participate in our election, you must have renewed your membership before April 1st. Mensa International will also be holding elections, and members will receive a separate ballot for that.